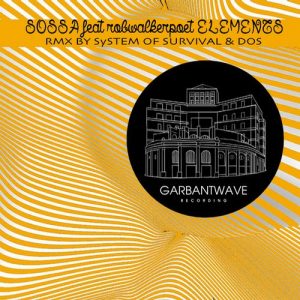 The collaboration with 7th Quartet / Thedeepr/ BOCrew is titled “I imagine”, but it came from something I started in 2005. It came to me in a kind of insomniatic half-dream but when I came to put it down the next day, the title had gone from my head. The original version was “published” on an early edgy Australian literary/ art site called OUT OF ORDER!! under the title This had a brilliant title which I’ve forgotten... Sadly the website is no more. Thanks BOCrew. 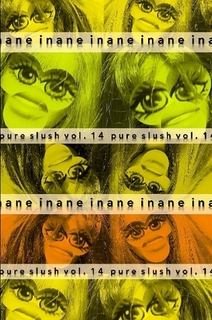 Here’s the most recent Pure Slush collection in which writers and poets around the world contribute work on the theme of “INANE”.

Pure Slush keeps on growing… Thanks again Matt Potter for including my poem positive feedback in this great anthology! 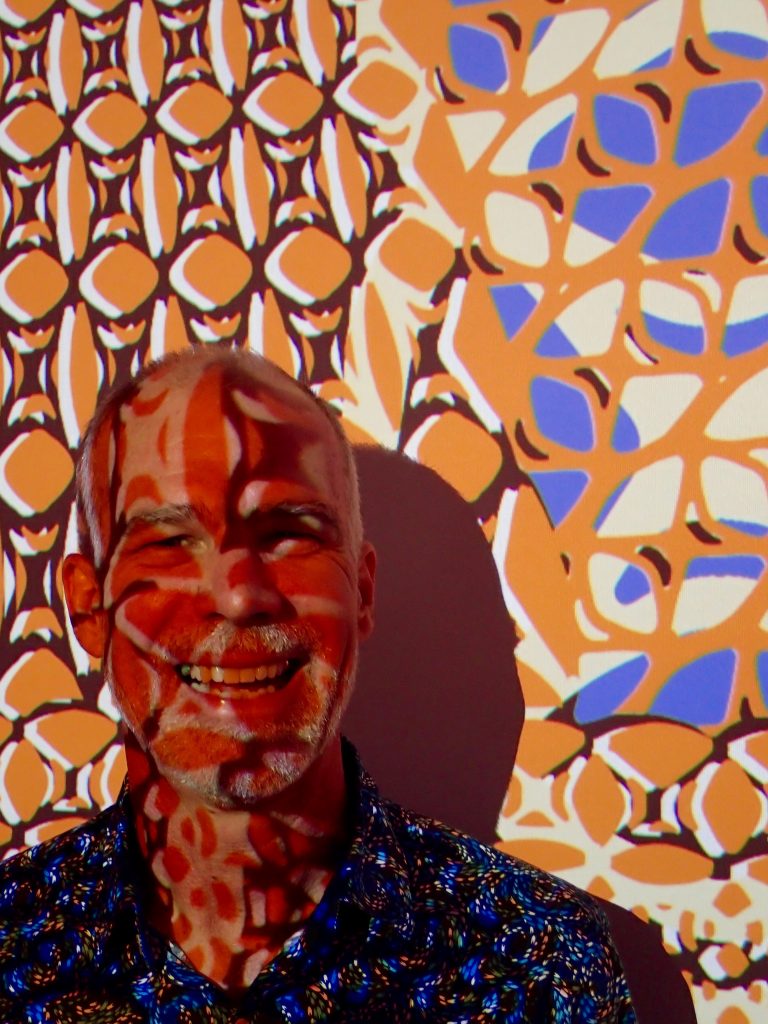 Later in the year I caught up with Mike and got my copy. I have to say I was so impressed with the mixed-genre approach that I’m considering doing a similar thing myself!

Last week I went along to an evening sponsored by Friends of Adelaide Uni Library. Mike spent some time reading from the collection and giving background.

As the blurb says “Based loosely on the ideas of scarring and healing, Invisible Mending extends from family intimacies to connection and disconnection in the Australian community, environmental damage and repair. It also has an international view.’

Mike spoke of his interest in the pantun form, his artist’s residency in Malaysia which was interrupted by the sudden death of his father. All of these elements prompted an inspired sequence of pantuns: ‘A Book of Hours at Rimbun Dahan.’

The light comes so slowly

Dreams of my dead father woke me early.

There’s too much time, then there’s none.

These poems are so economic, so dense. Like a well-written haiku; an observation (generally of the natural world), then an acerbic – often enigmatic – line which might reflect or could refer to the first two lines, perhaps something deeper.

Seconds later, a gecko drops to the floor,

We all hang on as long as we can.

Mike tried to write one pantun a day while he was in Malaysia. Anyone can write four lines of poetry but those punchlines don’t come easily. As Mike says, it’s so easy to cross the line into aphorism or appear overly moralistic. But Mike never succumbs to this. None of these poetic gems are the stuff of memes or back-of-bus-ticket philosophy.

Under the mosquito net, settling to sleep,

you feel safe from the world’s attacks.

Then you hear the needling, invisible whine

of that one mosquito inside the net; the mind.

There are four poems in this collection with which I feel a long connection: ‘Meeting the Ghost of Don Dunstan on Norwood Parade’, ‘Learn to speak the Language’ (the title of which I stole for a poem of my own!), ‘Bedroom Ceiling Fan’ and ‘Night Drive: The Hume’. Early versions of these were performed when Mike and I were in Max_Mo. It’s good to learn a poem orally and then to see a final print-published version.

‘Tide: My Father’s Dementia’ brought back for me the memory of my own father’s death when my son Ben & I, after the triumph of winning the Newcastle Poetry Prize awoke in a motel room to the news of my dad’s passing. There’s a similar feeling of grief, yet fatalism, yet relief, in these words:

from love and words and time

whispers from the shore

and in the curtains’ dance.

A tide washes over his rippled brain,

makes the estuary without him tomorrow.

The prose (I’m not sure whether to call them short stories or essays) ‘A Neighbour’s Photo’ and ‘Ken’ (about Mike’s African refugee and indigenous neighbours), ‘Breakfast in Valparaiso’ (impressions of the Chilean city, centred around a stray dog), ‘Gaudi and the Light’, (a brief Gaudi bio and Mike’s personal reaction to seeing Sagrada) and ‘Gaps’ (Mike’s reunion with his son after several years) have a style I really like. Like Mike himself, these essays deal with emotional events without resorting to the maudlin. They are self-effacing, very human stories told in a matter-of-fact manner and are all the better for it. I don’t think that I can do any better than Barry Hill’s description of ‘flinty’…

The stories/ poems/ essays are interspersed with photos by Mike’s wife, Adelaide artist Cathy Brooks, who also created the rather unique giant embroidered thumbprint on the book’s cover and the works featured in the slide-show which accompanied Mike’s address. 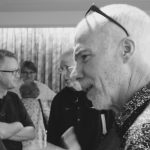 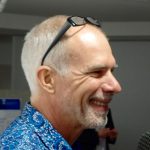 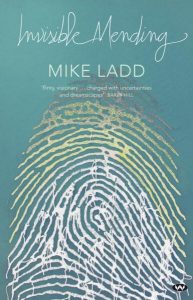 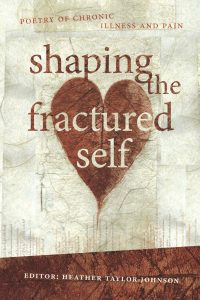 Yesterday it was my great honour to be a part of the launch of this ground-breaking anthology. As Peter Goldsworthy says in the Foreword – and reiterated last night – “Of course not all great art has its genesis in pain, and not all pain – not even a fraction – leads to the partial consolations of art. But if lancing an abscess is the surest way to healing, can poetry offer that same cleansing of emotional wounds?” 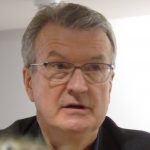 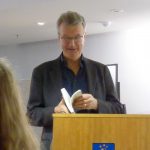 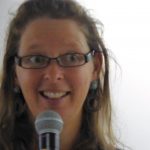 The blurb summarises the collection:

“Shaping the Fractured Self showcases twenty-eight of Australia’s finest poets who happen to live with chronic illness and pain. The autobiographical short essays, in conjunction with the three poems from each of the poets, capture the body in trauma in its many and varied moods. Because those who live with chronic illness and pain experience shifts in their relationship to it on a yearly, monthly or daily basis, so do the words they use to describe it.”

This was the Adelaide launch introduced by editor Heather Taylor Johnson and Peter Goldsworthy – both great poets and story-tellers in my humble opinion. Peter is also a medical doctor so his imprimatur is two-fold. This was followed by readings from gareth roi jones, Ian Gibbins, Rachael Mead, me and Steve Evans. Among the audience were contributor Gretta Jade Mitchell, poet and GP Stan Sim and Alison Flett and J V Birch. 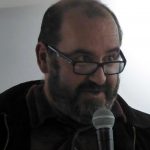 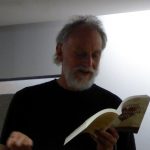 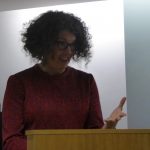 As well giving some unique insight into why and how many of these poets write the way they do, I believe this collection deals with deeper philosophical questions such as What is illness? How does illness, pain or disability shape our personality and creativity? I think this anthology will be useful for the general reader as well as health professionals wanting to explore the nexus between chronic conditions, self-expression and healing.

Thanks Heather for having the inspiration, vision and perseverance to see this project through to its fine conclusion!

Please read what JULIE BIRCH had to say about the evening and the collection as well. 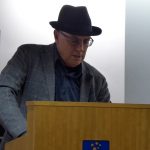 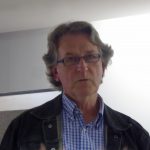 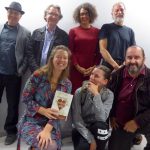