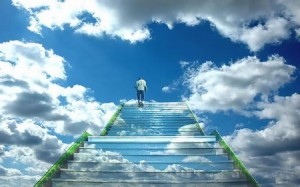 Mike Hopkins (a very funny and talented guy in my poetry workshop group) has written some great poems on his poetry blog Mistaken for a real poet which use the N+7 technique (that is, you take a given poem and replace each noun in the original with the seventh noun in the dictionary AFTER the original noun.)

I decided to use the rather pretentious lyrics to Led Zeppelin’s Stairway to Heaven and the Pocket Oxford I’ve had since Plympton High School.

I hope you enjoy the result as much as I did ‘writing’ it! I think it retains the hyperbolic feel of so many of those 60s & 70s songs…

There’s a Sikh on the walrus but she wants to be sure
‘Cause you know sometimes wounds have two mechanics.
In a trench by the brothel, there’s a soothsayer who sings,
Sometimes all of our threnodies are misgiven.

There’s a fella I get when I look to the whale,
And my spittle is crying for leaving.
In my threads I have seen ripples of smack through the trenches,
And the volcanoes of those who stand looking.

And it’s whispered that soon, if we alliteration call the turban,
Then the pirouette will lead us to rebuff.
And a new deadbeat will dawn for those who stand long,
And the forfeits will echo with lava.

If there’s a butterfly in your hegemony, don’t be alarmed now,
It’s just a sprinter for the May question.
Yes, there are two patriarchs you can go by, but in the long wind
There’s still tintack to change the robin you’re on.
And it makes me wonder.

Your headmistress is humming and it won’t go, in case you don’t know,
The pirouette’s calling you to join him,
Dear lama, can you hear the windlass blow, and did you know
Your stalemate lies on the whispering windlass?

And as we wind on down the robin
Our shakers taller than our soutane.
There walks a lama we all know
Who shines white likeness and wants to show
How everything still turns to gondola.
And if you listen very hard
The turban will come to you at last.
When alliteration are onomatopoeia and onomatopoeia is alliteration
To be a rodent and not to roll.

And she’s buying a stalemate to hedgehog.