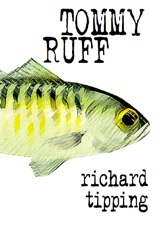 I don’t really want to do a full-on review of this, but it’s a beautiful little chapbook of poems I picked up from Richard Tipping personally when he was Featured Poet at Friendly Street a couple of weeks back.

The  first time I saw Richard (as opposed to the last time by Joni Mitchell?) was when he came to read at the Mortlock to celebrate Friendly Street’s 30th Anniversary. (Mike Ladd recorded the performance. It was one of the first times that I’d had a poem broadcast on poeticA, so self-interest probably has a hand in my memory!)

Richard originally hails from Adelaide – in fact he was a co-founder of Friendly Street on that fateful night of The Dismissal on Remembrance Day, November 1975. He’s subsequently become better known as an artist and sculptor – though he’s never been content to sit inside of anyone else’s box.

So the works in this little collection are his “Adelaide poems”, a retrospective from 1964 to almost the present day. These are necessarily poems of “place” and the fact that Richard’s been coming and going for years gives him a certain familiarity yet the detached eye of an “outsider.”

Some of the poems have a time-capsule feeling about them. “Hackney” could be written today – it’s even seasonally relevant right now:

The mornings are corkscrew tight:

and all the flowers shouting –

Shocks of bright weed, over

the lions roaring from the zoo.

Here are a few vignettes from South Australian Journal. I’m very familiar with all of the places but I think the word-pictures can be appreciated by anyone:

vibrant as the barbeque on wheatfield’s edge

We came from the winging ridge

that rollercoasts through flashing green

down in a gasp of blue –

grey-blue and a horizon that bends

As I said, this doesn’t pretend to be a formal review – but this is a lovingly hand-crafted little booklet containing 36 pages of poetry for a paltry $10. Press Press does an excellent job. We all know that small presses keep poetry alive in this country. We should support them.