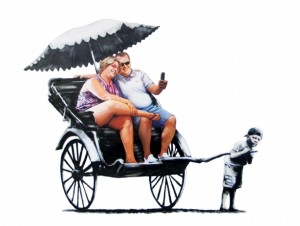 Re: Mote Observer vs Consumer Whore
This was my contribution to ccmixter’s Flying Time Secret Mixter Project. I was given Kirk Anderson (Kirkoid) as the artist to mix. I used Kirkoid’s Big Phat 80s Synth mix of Kara Square’s Consumer Whore and remixed it with my poem re:mote observer. The contrast between my very detached re: Mote Observer and Kara’s Consumer Whore – a desperate and very well crafted rant about the guilt associated with excessive consumption – produced a bipolar mix which I hope reflects the constant emotional ambivalence associated with just “buying stuff.”
I went back to Kara’s original samples and used snatches of them before building up to Kirkoid’s Big Phat production. Thanks to both Kirkoid and Kara for such fine material to work with!

my needs are met
my stomach full,
no one to impress

* Originally written around 2003-4. A shameless pun on “mote observer” and “remote observer.” I was aimlessly ambling around Westfield Marion when it occurred to me that I wasn’t a very ‘good’ consumer as I had no immediate needs or wants, other than to watch everyone else.
This one appeared on David Barnes’ Numbat Poetry Website Vol. III and a great pioneering poetry website called Indie Journal (US) back in 2004 – sadly defunct and unarchived.

(Click on the word “Consumption” under the image above to hear the track in case you haven’t worked that out already!)