Rebecca Copley is an Adelaide freelance writer and editor with an interesting writing blog.

About a month ago she approached me for an interview which has just been published.

” The cathartic stuff we pour out when a relationship disintegrates or we lose someone we love might be therapeutic to us but can still be crap writing. It’s all a part of the challenge to write something which is personal and local, but simultaneously universal and global. I wrote reams of stuff when my younger brother died, but probably only two of the poems were any good. Similarly when my dad died in 2009 I tried to put everything into written words. It’s an impossible task. The only good poem I wrote was called Transcendence and it took six months to write. I suspect that it went down well with others because it dealt with universal themes of loss and that especially poignant moment when we begin to grieve for the person even before their death. In my case it was my dad was losing his memories – and his very humanity really – before his body was dead. We talk about the zen ideal of living in the Here and Now. But when we are completely in the here, now, we have no shared history.” (MORE) 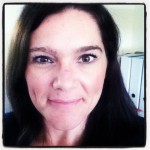 Thanks for the interview, Rebecca. Good luck with the blog.