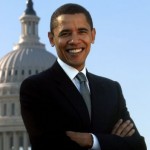 Long-time readers of this blog will recall that last May I wrote Obama’s Inaugural address 9 months before he presented it to the world – a suitable gestation period. Obama’s delivery yesterday was far superior to mine.
But considering I wrote mine well BEFORE the global crisis or even the primaries, I’m quite pleased at how much I got right. OK, I predicted that after defeating Hilary, he would go on to trounce McCain and welcome Hilary back into the fold as his VP – Secretary of State was close, though.
Have a look at these excerpts. Barry was very grateful for my input. You’ll see that he’s changed my wording, but the gist and tone are remarkably similar:

I believe with all my heart that the time has come for a healing. You, the good people of America, have rejected the old politics of division and distraction. From the snows of Iowa to the warm winds of Florida; from the open spaces of the Grand Canyon to the canyons of the Big Apple, you have spoken loud. You are tired of Washington’s business-as-usual. You are hungry for change. You are ready to believe.

“On this day, we gather because we have chosen hope over fear, unity of purpose over conflict and discord.
On this day, we come to proclaim an end to the petty grievances and false promises, the recriminations and worn out dogmas, that for far too long have strangled our politics.”

If we are to make this nation great once more, we must admit our shortcomings and plan for our future. Fine ideals are a beginning. But they are just that. Our task over the next four years is to close that gap between the promise of our ideals and the reality of our times.

Today I say to you that the challenges we face are real. They are serious and they are many. They will not be met easily or in a short span of time. But know this, America – they will be met.

We need to rebuild our disintegrating schools and shuttered mills which are stealing the future of our children.
We need to listen to that deserted mother in a trailer-park in South Carolina who can’t get Medicaid to cover her sick child. She needs Congress to ratify CARE that cuts costs and makes health care affordable for every American.
We need to raise that Allentown worker who lost his job when the steel company moved its jobs off-shore, so that now he’s competing with his own teenager at McDonald’s for $7 an hour. We need meaningful work to put greenbacks in the pockets of struggling homeowners. We need to reach out to our seniors and veterans who have served their nation well and deserve to retire with dignity and respect.

That we are in the midst of crisis is now well understood. Our nation is at war, against a far-reaching network of violence and hatred. Our economy is badly weakened, a consequence of greed and irresponsibility on the part of some, but also our collective failure to make hard choices and prepare the nation for a new age. Homes have been lost; jobs shed; businesses shuttered. Our health care is too costly; our schools fail too many; and each day brings further evidence that the ways we use energy strengthen our adversaries and threaten our planet.”

“From this day we strive for a politics of innovation and commonsense, shared sacrifice and common prosperity.”

Time and again these men and women struggled and sacrificed and worked till their hands were raw so that we might live a better life. They saw America as bigger than the sum of our individual ambitions; greater than all the differences of birth or wealth or faction.

“We need meaningful work to put greenbacks in the pockets of struggling homeowners. We need to reach out to our seniors and veterans who have served their nation well and deserve to retire with dignity and respect.
So today I propose a new Initiative as revolutionary as the Democracy proposed by our founding fathers, as fundamental as FDR’s New Deal.
We expect Congress to respect the Will of the People and immediately ratify the Rebuilding America Bill, creating millions of “green collar” jobs.
We have many challenges to reconstruct our infrastructure – our crumbling roads, bridges and highways – on a scale unseen since Europe’s post-war reconstruction and the New Deal.
We have opportunities to revolutionize our public transportation, cutting down on traffic and pollution.”

“For everywhere we look, there is work to be done. The state of the economy calls for action, bold and swift, and we will act – not only to create new jobs, but to lay a new foundation for growth. We will build the roads and bridges, the electric grids and digital lines that feed our commerce and bind us together. We will restore science to its rightful place, and wield technology’s wonders to raise health care’s quality and lower its cost. We will harness the sun and the winds and the soil to fuel our cars and run our factories. And we will transform our schools and colleges and universities to meet the demands of a new age.”

“The doomsayers will say it cannot be done. Those who said that young people are apathetic, that Republicans wouldn’t switch, that the wealthy are uncaring. That the poor don’t vote. Those who said that an African-American supported by a white woman could never become president of this great nation.
We have proven them wrong.
Together we will build a fairer America.
Together we will share a peaceful world.”

“Now, there are some who question the scale of our ambitions – who suggest that our system cannot tolerate too many big plans. Their memories are short. For they have forgotten what this country has already done; what free men and women can achieve when imagination is joined to common purpose, and necessity to courage.”

“Washington lobbyists and special interest groups who’ve long been living high on the hog will holler that we are attacking the very essence of capitalism. We are not. We are using the Common Wealth as a safety net and a scaffold upon which we all can build.”

“Nor is the question before us whether the market is a force for good or ill. Its power to generate wealth and expand freedom is unmatched, but this crisis has reminded us that without a watchful eye, the market can spin out of control – that a nation cannot prosper long when it favours only the prosperous. The success of our economy has always depended not just on the size of our gross domestic product, but on the reach of our prosperity; on the ability to extend opportunity to every willing heart – not out of charity, but because it is the surest route to our common good.”

I rest my case.

You can see the entire “original” May o8 speech HERE.

Soon after my recent return to Australia I exchanged a few emails with Australian poet David Barnes. I’ve spoken of David many times. It was on David’s early online poetry website Poetry Down Under that many of my early works were published in the mid-90s. He’s had significant health problems over the past few years, but he battles on. I believe his poetry just keeps getting better and better. With David’s permission, here are three recent examples:

i do not sleep much anymore

unremittingly it is naps and snacks

pen in hand, inscribing words at 5 am

i have prayed for relief

there is no answer conversing with God

exceeds the velocity of light

is a continually moving flash

this leaves no thought

on how to spend

and the only man

with the solution died

i will have to continue

between toast and coffee

he had his time his time

a time of multi-coloured madness

his tormented short-lived mind so alive

as if they were Sigmund Freud

trying to dissect him –

he strolled though the countryside of his friend

stopped to paint lilies in the field.

the night’s discussions and revellers depart

the door closes for another night

another time in time.

outside they walk past the drunk

sprawled in the sidewalk gutter

water spilling round past him down the drain

is it his time-time is irrelevant

there is no time at this point in time

if I had a fetish;

for I was turned on